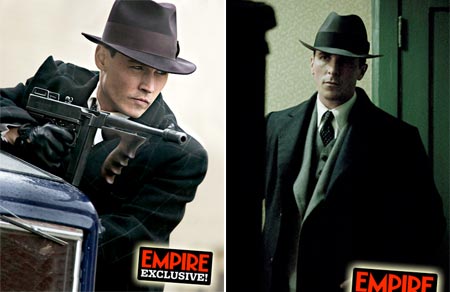 I generally don’t like the movie which the critics approve of; and critics have approved Public Enemies. With a cast of Bale [he has become my favourite] and Depp, set in the great depression era, story of a bank robber; the expectations were ought to be high and most of them have been met. But the ones which are not left me a lot disappointed.

The movie is story of John Dillinger [Depp] a bank robber and Melvin Purvis [FBI agent] trying to nab him. That’s all about story nothing more to talk about it. This much of plot is enough to make a strong, gripping crime genre thriller. Atleast this is what I had in mind when I went to watch it and I guess this is what the director has also tried, But unfortunately failed. The movie just turns out to be a little too slow for a thriller and lacks the intensity to be a convincing crime genre flick.

As far as actors are concerned, I don’t know what Bale is doing here, although he looks cool and composed as always. His character of Melvin Purvis has been left completely unattended. He as an actor has been totally wasted by the director and his character is sounding stupid more often than not [had Melvin Purvis been alive he would have not liked it]. still the two best scenes of the movie are the ones with Bale only; the one of his entry where he is shooting a fugitive, with the Ten Million Slave playing in the background [the use of this sound track is perhaps the only thing which director has done properly] and second a shooting sequence at night in woods between ‘feds’ and robbers.

Depp is supposed to be the oh-so-cool witted robber. Well he actually tries and succeeds too but his acting lacks the much needed gravity for playing the gangster. Although Dillinger was not known to be an intense persona, but while playing a bank robber you need to have some of it.

Then there is Dillinger’s girlfriend Billie [Marion Cotillard] who is doing nothing except being the distressed girlfriend. Except for one interrogation scene in which she actually gets to show her acting prowess and mettle to be girlfriend of a bank robber nothing is there for her too.

The movie definitely lacked the speed and nothing much is happening for too long. It also lacks a face to face confrontation between the two leads; except for a brief encounter in jail. A more elaborate conversation over the coffee would have been interesting. The shot of Depp going in the police station and roaming in the Dillinger squad room, admiring his legacy and asking the cops about the score is interesting; although I doubt something like that would have actually happened. All in all an average movie if you talk about thrills and frills. But as I earlier said critics liked it.

Smoking Ban In Public Places – What After that? The A Team . . . Red Cliff Prince Of Persia Sands of Time The Hangover