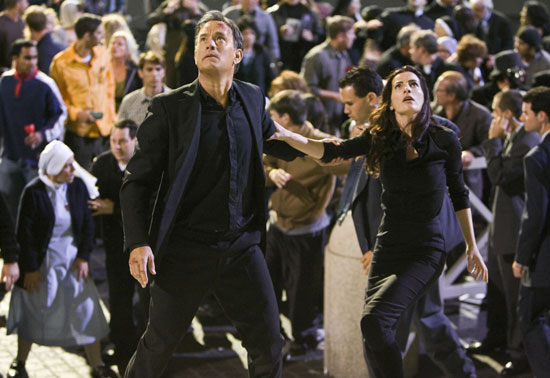 I didn’t like ‘Da Vinci Code’ and the fact it was based upon church and Christianity mystery made it even more pathetic. Not because am a church activist, against portraying it in bad light; but mainly because of two reasons.

One, my knowledge of Christianity is as good as my knowledge about rocket science [I guess being a science student am more informed about the latter] so understanding the history-mystery part with religious angle thrown in between made it a difficult task and more confusing. Second, the religious angle was obviously thrown in to generate controversy; a time tested formula for free publicity [was the author Dan Brown was not sure about his writing prowess that he relied on controversy as a measure of success]. As far as ‘Angels and Demons’ is concerned, both the history-mystery part and the controversy are minimal.

But that doesn’t mean I liked it; I just disliked it less as compared to the first movie [or the second book. Ron Howard, the director is funny man! He made first movie based on second novel and vice versa]. As far as story goes, this time an ancient anti-religion society ‘Illuminati’ has surfaced all of a sudden, kidnapping the four Cardinals after the death of the Pope. Prof. Robert Langdon [Tom Hanks] is called to find the four cardinals and prevent a blast [from some stolen anti-matter] which will wipe out the entire Vatican City. Why Langdon is called, there is a stupid reason behind it i.e. an ambigram [you know the one which can be read from both upside down].

There are other characters as well and the chief of Vatican Swiss guard, who is mocking Langdon continuously and looks to be least bothered about finding the Cardinals. Then why the scientist named Vittoria Vetra [the one who created anti-matter] is helping Langdon [just to throw in a character]. And there is Father Patrick [Evan Mcgregor] who appears to be only one smart and intelligent in the whole Vatican and trying to help professor.

There are few things which keep on bothering you throughout the movie; why the kidnapper is giving Landon clues about his location and plan? Moreover, more often than not the clues and the way they are being solved appears very stupid. The stupidity reminds you of National Treasure-2, although had the clues been upto the level of even National Treasure-2 the movie would have been more enjoyable. Also the hint of debate on religion and science seems to be forced.

To end in a nut shell, much like the ‘Da Vinci Code’ I didn’t liked it, but I certainly enjoyed it more. At the end of the day it’s another catch the culprit and prevent the murder flick, nothing else; just the events are happening in the Vatican and church is involved. Nothing but a meager ‘B’ for me!