On 15th January #OddEvenFormula ended and with lot of pomp and show the CM declared it successful in bringing down the pollution. Lot of news channels hailed it as a revolutionary step and scores of them trying to showcase public mood said people are all game for it and are happy with this step. The CM declared a public meeting in Chattrasal Stadium to thank Delhiites for participating in it and making it successful (what happened in that public meeting and how all attention all of a sudden from #OddEvenFormula shifted to #CowardBJP #KejriinDanger is another story).

Now the government wants to bring back the experiment for a longer duration with lesser exceptions (read bikers & women drivers) during the summer vacations of schools; so here is a reality check of the ‘success’ of #OddEvenFormula as propagated by media and the government.

As we said during MBA, in God we trust for everything else show me the data. First of all, no one has clear data to prove that pollution fell due to lesser cars and not because of decreased humidity and increased winds. There are contradictory reports from various organizations about pollution levels and its linkage to number of cars on roads and unless you have concrete data to prove otherwise, I would not credit this step as a solution to problem. Moreover if cars are the biggest source of pollution then what good does ‘pollution under control’ checkups (which we are supposed to get every 6 months) and non-polluting vehicle certification of the government do?

Secondly almost everyone agreed that amount of traffic was less on roads and there were lesser jams, estimating there were around 30% lesser cars, sale of fuel went down etc. and if not pollution then it definitely decreased traffic. On first Monday after #OddEvenFormula few of media’s propagandists were asking to bring it back for sake of decreasing traffic. 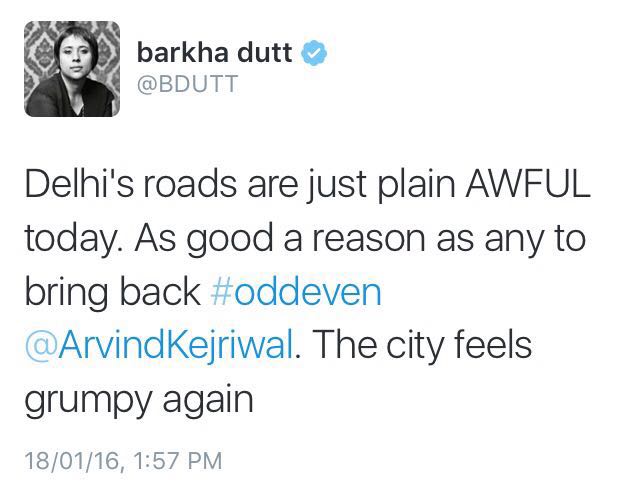 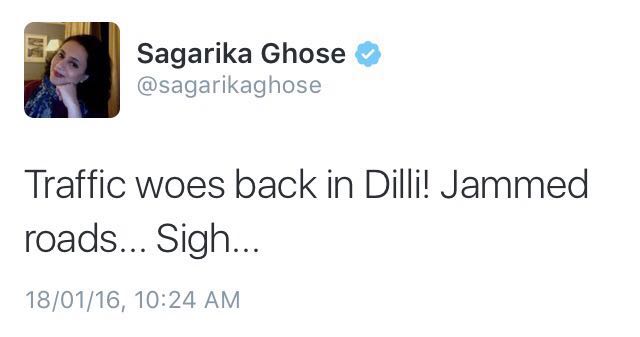 As per this logic, although the patient died on operation table but the good thing is we can now harvest its body parts for other’s treatment, so lets kill few more. Drama queens Ms. Dutt & Ms. Ghosh, who stopped you from taking metro now that #OddEvenFormula is gone? Or you just want other lesser mortals to stop using cars and free the roads for your pleasure? Everyday during the second week of this experiment, HT ran a picture, showing almost empty stretch of one Delhi road comparing it with another picture of same stretch completely jammed (before #OddEvenFormula). When only supposed 30% of traffic was off the roads then how come 90% of traffic vanished from your image?

As far as reduced traffic and lesser sale of fuel goes, during school holiday sale of fuel is bound to go down as all the school staff, parents (picking-dropping their kids) private taxis, vans, autos, RTVs (ferrying kids) are off the roads and so is the traffic associated with it. Also lot of Delhiites goes out on vacation during school holidays (further decreasing congestion on roads). Unless we compare data of this 15 days to a period when schools are closed, there is not much significance to what it proves. And for traffic jams, most of them are due to non-working traffic lights, broken down vehicles, people not following traffic rules. Instead of fixing these, taking off traffic from roads is ‘na rahega baans, na bajegi bansuri’ solution.

As mentioned in an earlier post #OddEvenFormula all those who can afford consider buying another vehicle with a different number just to avoid travelling in public transport, if #OddEvenFormula was to be implemented permanently. Unless public transport is robust and convenient enough for people to take it voluntarily, any long-term implementation of #OddEvenFormula is bound to fail. You cannot force people to give up cars without having alternative in place. For 15 days everyone waited before buying another vehicle; for 15 days people postponed lot of work that they could; for 15 days people adjusted, as it was temporary only for 15 days.

So before making it permanent or implementing for longer period, you have to drastically improve public transport. And mind it taking taxi is not travelling by public transport; this is the most absurd logic in which the government counted taxi as a public transport. A taxi is just replacing your own vehicle with a hired one, which does not reduce traffic. So for your information Kejri sir (since you are from village and you don’t know much) public transport comprises buses, metro, local trains, monorail etc. and not taxi for hire. Moreover forcing people with hefty fine of Rs. 2000/- to give up cars is not voluntary participation. Stop this appeasement of ‘Dilli ke log bahut ache hain’ and start working.